A downloadable game for Windows

THE SIGIL is a story-driven melee combat game set within a child's imagination. Delve into his psyche and explore a past best left forgotten.

Note: This build is an alpha of an upcoming game under another name. You can find the other storepage here.

looks cool from what I could do, but seems like you have a major control scheme problems. I couldn't reassign keys correctly, it would assign some random key.  It would not let me restore defaults.  Many times I couldn't figure out how to go to the next screen or confirm.  When I got to Choose Character I could click the CONFIRM button but nothing happened I couldn't get by that screen so I had to quit.

Could I ask which keys you assigned? Did the controls menu just reassign the key to another random key or was it completely blank?

I just tried binding control keys to SPACE/SHIFT/CRTL, and I can confirm that it does not work. I'll be sure to fix it asap.
Thank you for bringing this bug to my attention!

Pretty interesting. Which engine do you use?

Hey, thank you so much for playing! I really enjoyed watching your playthrough!

Thank you for your time and developing the game. Keep up the great work.

- Mapping interaction on both space and enter is really convenient

- Pressing S to sit down is a nice touch

- Options menu is surprisingly fluid and offers more options than I'd usually expect (especially from an alpha); the UI overall is very satisfying to navigate through, and highly legible

- R/T/Y for combat functions feels very strange, especially when paired with WASD; I attempted to remap them in options to more familiar settings but was unable to (I suspect a limitation of GM more than design?)

- Chromatic distortion and letterboxing effect upon death is really neat

- Combat feels chaotic at times and difficult to navigate, although I suspect a large part of this is due to the aforementioned foreignness of the controls; I suspect once the player gets used to them it'll begin to feel a lot more accessible

- Stamina bar has a tendency to blend into the backdrop a bit, but looks really good and is pleasant to read, especially with the flash effect on consumption

- The Sigil itself is really neat visually (not really feedback but is that shit being animated mathematically with primitive draws???)

- Using the mouse to select a character feels abrupt since the mouse, as far as I'm aware, isn't used in other places; nonetheless it's implemented well

- The narrative framing of the kid playing alone as a means of dealing with a distant family and especially father(?) is interesting, and does a good job reframing the action

- I personally found the text effects a bit too much, but that's probably just a personal thing

I got stuck on the character select screen and couldn't progress any further in the story: I selected the Crusader, clicked Confirm, but it didn't do anything.

All in all though I think the game has a really strong presentation and, if it weren't for the controls, which I personally found to be unfamiliar to the point of (mild) frustration, the gameplay would be similarly on par with the audio and visuals. Really nice job with it so far, looking forward to seeing some more environments in the future!

I can't open the game for some reason

Hi Rylod,
Does the game have an error msg that prevents you from opening it?
There is a known issue of Windows Defender blocking the app, however, but you can click 'Run Anyway' to bypass it.

While I like the art style and theme I could not play this game. The speed of the combat is so insane I cant even react to it. The prompts that you get when looking at your journal or book flash by so quickly I could barely read them. Maybe if there was some tutorial before you start fighting it would help me adjust to the speed of the game.

Hi Baconation!
I really appreciate you trying out my game.

Thank you for your feedback, it really helps me!

The prompts I am referring to are the ones that appear when you open a book in the bedroom and it has text fly past the screen saying what keys to press. It barely gives you any time to read them.

For the speed of the game I could not tell you how the AI reacted because they move so fast I don't even have time to think. By the time I am ready to line up an attack the enemy has already moved or hit me a ton of times. In general, all movement for the game seems like its 4 times faster than it should be, almost like I'm watching like a movie in fast forward.

I've reuploaded a new version if you are still interested in playing. I think there is a bug with framerates - the game plays past 60 fps on certain devices. The new version should lock it to 60 frames, although there is a debugging tool if you press 'F1' to check. :)

Thank you for your time and patience!

OK, thanks for the fix, I was able to play the game perfectly with the new version. Gotta say, for someone that says they are new to doing stories in video games, this is really good. I made it to the end and I can see you are going somewhere interesting with this.

The combat was the weakest part for me. I thought it was just a bit too simple and could use some refinement.The animations and movement though were good and the enemies felt good to fight.

The most I've done with stories in games is a wall of text explaining the backstory, so this time it's a bigger leap forwards :)

Again, thanks for playing! I'll make sure to incorporate your feedback during the next few steps of development until the final release!

The camera style, flashes, camera move, camera shake used in this game is excellent. Loved it. 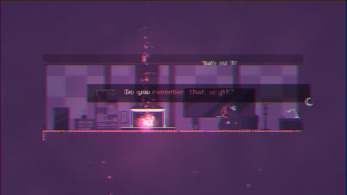